How technology is affecting the occult world 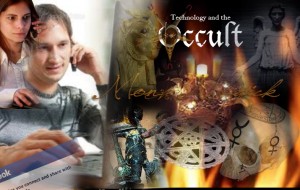 Not too long ago it was only by discrete word of mouth were you even knew or even more invited into the many occult and esoteric groups of yester-year.  It wasn’t a matter of just joining because of your geographic location; you really had to have a kindred spirit, a true belonging that many considered as family. Once joined may took on a completely new identity from an outside perspective because you actually kept secrets and didn’t let anyone into your circle.

Back in the day, rituals were held on location. There just wasn’t any other way. I can actually say based on what I know to remember it would be consider ludicrous to say “I’ll send you some energy” or better yet, “Let’s  text each other at the precise lunar moment of 22:59 EST when Mercury is in conjunct”. In spite of how enlightened the many have been I must say that occult traditions have pretty much assumed the missionary position – and why not? Some things just isn’t the same, I mean come on? How many of you can go on with indefinite masturbation or just dry sex without really knowing the real deal with all the interaction involved is what really makes the experience breathtaking and hopefully in all your cases orgasmic.

Can you really have a virtual initiation?

Most of you who know me, know that I speak from experience in that the internet discoveries isn’t  as advanced as I know it could be but I have to say that the occult and spiritual community has utilised this medium and is constantly stretching it to its limits. Gone are the yeas of the heavy use of the .ALT groups (although they still exist) and hello to the wide world of souls and energy travelling via networks across the globe.  You now have virtual covens, initiations, healings…there is no limit. If you have a thought-form, then it can and will exist within a few clicks, mouse-over and return.  Enter the world of new paths, religions, sects and titles. Anyone can appoint a title in front of their name to Priest, High Priestess, Mambo, Shamans, Hougan, Lord, Ordained Ministers, Lady, to Master…and so on. Anyone can have a different thought spawn via a hierarchy of paths and call it what they will going on the premise that it’s their interpretation and so on.

Is this authentic? Can you really have a virtual initiation? I mean after all, the matter in which we do our esoteric work is via spiritual anyway so why would someone need to be present. Or is there something irreplaceable with having human to human contact? Can you really answer this without staying slightly in the middle?  The whole internet movement is very likely to become a major component in how we deal with spirituality due to how everyone is restructuring how they deal with “time” and communication not to mention finance. So I ask you are we evolving, being disrespectful to tradition or have we just found a better way towards our goals?  There are a few sci-fi movies that married technology and esoteric thought and funny enough these authors may have been our prophets in disguise (either that or we have millions of groupies by the droves!).

From a business sense I must say that before it’s too late it will be essential for anyone in the line of occult, and esoteric studies pays attention to how technology is growing around them, already the brick and mortar occult stores have had he heaviest impact. Not before long will many more catch on how to actually tap into the frequencies, vibrations and energies that can be utilised via the internet to do both great good and of the lesser. Just try this simple experiment and go into any chat room or via your Facebook account and see how accurate you’ll become in picking up on vibrations, to remote viewing by just one pixel that can transfer loads of information.  You can read this article and think that I’m a lunatic but you keep on thinking that and see how right I am!

So how do you use this inevitable growing technology?

Technology is full of opportunities into making your life easier. There are some caveats however that it can be as dangerous as walking in a dark alley to in some cases upward paths to financial security. No matter how far you decide on taking your online presence be assured that it will only expand and you have been forewarned to get your act together as soon as possible! ♦