The study of cultural anthropology, and fraternal societies has overshadowed the embedded source by which occult and esoteric paths have played throughout humanity. Much of the esoteric phenomena outside fundamental religions related to spirituality has been regarded as either folklore or superstition, dismissed as a less than a worthy practice to the mainstream of social acceptance.

Of recent history, coined terms such as the “Satanic Panic” and “New Age”, the “Wiccan Movement” and of late, the “Left Hand Path (aka LHP) have been something all too familiar not only in the wider public but amongst the esoteric circles. With the influence of the media and it’s propaganda, depicting practitioners with the persona of seeking an outer force of power beyond humankind to control and rule the likes of others has been the stamp that many have come to ring true. Alas, many within the community have not been successful to correct this façade that this ignorance reigns. However, ever so often there comes an icon willing to brave the change of ignorance giving knowledge to all, and resetting the course of the future.

Dr. Connell R. Monette of Associate Professor of Religion in the School of Humanities and Social Sciences and Mohammed VI Library Associate Director at Al Akhawayn University in Ifrane, Morocco visit again to share his work. He also holds a Ph.D. in Medieval Studies from University of Toronto, and his major areas of research are medieval religion and literature. To dispel the ignorance of spirituality Prof. Monette sought to examine five contemporary spiritual areas: Hermeticism, Paganism, Sufism, Tantra, and Yoga. From Dr. Monettes’ research came the first edition of Mysticism in the 21st Century, an academic published through Sirius Academic Press, made available worldwide scholastically to presented by other universities and to all those who desired to have an authentic view of the path-lines presented. The awareness that Connell Monette has brought even to the esoteric community is much of a blessing in itself, in it proves that doors can be opened and consciousness can be raised to the wider population if you just rise to the occasion.

The first edition of Mysticism in the 21st Century was well received by academics, the curious and practitioners alike. Where one didn’t know which book to pick up, or where to seek further knowledge was found within the chapters of this first book through the collaboration of Shri Kapilnath, Stephen Abdullah Trevathan, Anton Long, Jall, Mark Alan Smith, Robert Svoboda, Zhander Remete, Emma Balnaves, Michael Kelly, HH Bir Krishna das Goswami, and Andrea Olivera all great mystics within this time, this was made possible.

Dr. Monette decided to carry on and expand his research of other paths which brought him to release the 2nd edition of Mysticism in the 21st century bringing back the strong paths from the 1st edition, such as the current – Primal Craft which was academically identified as an authentic Path of Hecate in this Aeon which has expanded tremendously through his the devotes of this path worldwide, with the ongoing development of The Garden of the Gods, the empowerment of The Temple of Belial, not to mention the recent release of The Witchblood Grail. Dr. Connell introduces new material from African Traditional origins of the Gnawa spirituality, Shambhala of Buddhism, and that of Gnosticism within Voudon. The eight chapters Dr. Monette shares is compact as well as powerful within the context of each path:

Sufism: The Boutchichia Tariqa
An introduction to the reader on the Boutchichi Tariqa as an example of Sufism, a form of Islamic mysticism. The Boutchichi Tariqa is a branch of the larger Qadiri Sufi movement, which has existed in Morocco for over three centuries. While genuinely a North African phenomenon, the Boutchichi have rapidly spread in the late twentieth century to become a global tradition.
Tantra: The International Nath Order

Tantra: The International Nath Order
The focus here is on the International Nath Order as an example of a Tantric tradition. Founded in the late 20th century in India by the British-born mystic, Shri Gurudev Mahendranath, this tradition has moved away from India and into the Western hemisphere. The INO is an interesting group given its emphasis on non-dogmatism, while encouraging a set of common practices.

Witchcraft: Primal Craft
Dr. Monette reintroduces the reader to Primal Craft as an example of contemporary Witchcraft. Developed over the last decade by British military veteran Mark Alan Smith, it focuses on the worship of the Goddess Hecate, and promotes Atlantis as the source of genuine mysticism.

Yoga: Bhaki Yoga, Rune, Shadow
The examination of 3 systems of Yoga.. As yoga is such a popular and broad tradition, it is good to look at three distinct examples, which provide an idea of the diversity of practices which are considered as types of yoga by their practitioners.

In this 2nd edition, I found the context to be far richer than the previous release, because I intuitively feel Dr. Connell has illuminated what we all want and crave from each of these paths as an introduction before leaping too far – yet deep enough, to entice the soul into further exploring should it be the path of ones fate chosen to pursue. In speaking offline with Dr. Monette, one cannot help but noticeably detect the passion and intensity of devotion from those within the 8 chapters of this wonderful book, and why he was driven to name it justly so, “Mysticism in the 21st Century”.

Magick through the Mirror – PayPal Agrees. 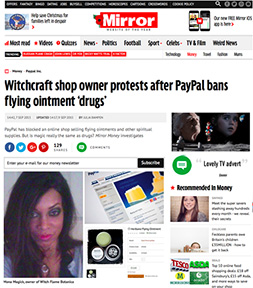 http://www.mirror.co.uk/money/witchcraft-shop-owner-protests-after-6397219
Everything I share with the public is well thought out with the sole strategic aim to educate. Nearly a year ago I opened up my second store under the esoteric genre which replaced the original one I had for nearly 8 years till closing it down temporarily in 2009. Under this new business, I went under the operating business model focusing on the deeper aspects of ritual in addition to being an apothecary esoteric store specialising in handmade and rare items. I named this revamped store, “Witch Flame Botanica”. www.WitchFlameBotanica.com

In short, I am not in competition with anyone and am known to do everything both big and original. Let’s say for various reasons I got “noticed” by PayPal and was temporary banned for selling a few key products under their payment gateway which they felt was in violation of their merchant guidelines. It wasn’t just the Flying Ointment… nevertheless the ban has been since been corrected and lifted. As you know, PayPal is a really convenient tool to use with some of the most basic ecommerce carts however it can also be a bit of a pain not to use as it’s pretty much a monopolized tool used by most buyers.

When combating my case I had to do what I had to do… as I will not let anything nor one stand in my way to the work I do. I am happy to announce that not only PayPal, but any means of payment and currency is now accepted through Witch Flame Botanica! Within the upcoming weeks well before the holidays new items will be posted and made available, there will be something for everyone.

I am not sure if the Mirror will update this article as I have notified them that restriction was lifted, It’s already had over 74 shares so it’s great to know my story told. However I’ am overly grateful for the Mirror, of bring this to the world. It’s not the only time I have made the press with the last time being in the Golf News, but I’m pleased it made the “Money” section of the press rather than to be ever tossed alongside the paranormal section as so many would expect, after all as a way of life we walk amongst the many. I supposed if those within the esoteric community educated the ignorant, outside of the community rather than keeping everything so closed out of fear of ridicule, perhaps there would be a greater acceptance? I’ll keep on pushing…every effort counts.

It was an honour to personally interview Mark Alan Smith of Primal Craft in Costa Del Sol in southern Spain on his latest tome, “The Witchblood Grail” which is the second volume, in the Primal Craft Trilogy. Mark Alan Smith narrates path and purpose of the Witchblood Grail, explaining the rites within this tome may be used collectively, or stand-alone adapted to the path of the individual to find empowerment.

If a reader reads the tarot deck intuitively, they know that to read any deck is to bring it to live…to situate each card into a living realm and work then through the energies of the spirits within the cards to reveal the unknown – but just what if the reverse was to happen… Find out how Alice Smeets, artist of the Ghetto Tarot does just that with the people of Haiti. Here is the latest video released since May 2014 by Mona Magick: