Split Paths | The Divide of the Occult Community 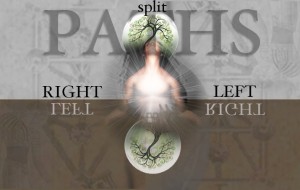 Could there really be such a thing – a genuine Left-Hand Path icon or one who walks the path of being 100% on the Right-Hand Path? Many have become conditioned into thinking to “BE” a representation of either they exclusively have to walk either on the Left-Hand or Right-Hand Path. There’s a saying… “The pot calling the kettle black” which generally translates to “I am accusing you of that which I am equally guilty of” with that said; Most will admit that there’s a very thin line to none, and some closer to one extreme than the other. Perhaps we should resolve to dissolve the divide because as you’ll  find as you read further, each begets a two-fold stance. After all, the birth of an intent from one path is easily crossed over as being the child of another… Never forget that everything Hitler did in Germany was legal” and upheld on one side as right…correct. “Nothing in all the world is more dangerous than sincere ignorance and conscientious stupidity” – Martin Luther King, Jr.

Within the past circles and the existing communities of the occult, the terms “Right-Hand Path” and “Left-Hand Path” or RHP/LHP for have long been coined as either white or black magic. To the public, depending on one’s belief, neither of the two have been referred as different but automatically dismissed as taboo, sinister and just pure evil. However, within self proclaimed enlightened communities (on both sides) there have been continuous snobbery, prejudice and immature behaviour that has caused a huge divide if not a huge stagnation to actually spreading the hidden or in better terms found knowledge.

The outside labelling followers of the occult perceive ‘evil’ as the result of ones’ will-power intersecting another’s’ will-power – but isn’t this exercised in many instances in life be it from an enforced or subtle approach?. Fundamentally whatever you do, you do for survival fulfilling your personal needs so truly, what is good or evil and is there a difference of the two based perspective? A Will exists in different degrees and in different ways so ultimately there can’t be a universal decision on what is white or black, good or evil…RHP or LHP.

Let me move over to the inner community…the communities of both RHP and LHP:

From the RHP Community
“Too dark, its dangerous leave the LHP alone your show will go down” “The LHP always has a hidden agenda, I rather not listen to the material, nothing good can ever come of it”

In both communities I have been witness to many being ostracised within their communities or groups based on independent thought.  I ask, “How can we expect growth if we keep on tearing down?” So rather than providing a biased opinion of either side, I’ve collated documented information to examine what defines both groups before either side merits the justification if that reach “Path Supremacy”:

The Right-Hand Path (RHP) is often defined as being a belief system or religion where a spiritual goal, state of mind (enlightenment), in many instances merging with the ‘God-source’, or the afterlife (as a prize for good spiritual behaviour whilst alive) is the ultimate goal. Contending to moral justice. In general, one can view the Right-Hand Path as a set of guidelines for behaviour and spiritual management to set up optimal conditions for the next life. The Right-Hand Path is often held to be that where a spiritual or supernatural force is necessary to embrace or worship to attain happiness or enlightenment. Harming none, not against another’s will and so on…The mainstream religions are often classified as Right-Hand Paths, for example, Hinduism, Christianity, Judaism, Buddhism, although clearly some aspects of Gnosticism are somewhat a Right Handed Path (in terms of the goal of Gnosticism to rejoin with God and escape the physical world and cyclic rebirth). Those that follow a stereotypical Right-Hand Path successfully could be said to be humble, relaxed, almost ‘high’, and feeling fulfilled on a deep level. Within Witchcraft or amongst those that learn more towards the New Age moment it is the practise of good will of “positive energy….more or less having a “feel good” and positive outlook and practise towards self, others and natural overall. Whilst the goal of mainstream religions may be to ‘extinguish’ the self, and to experience the spiritual realm whilst alive and after death of the physical body, clearly this is not attained by the vast majority of adherents in their lifetimes, but is an ideal of perfection that they wish to try to achieve to enrich their lives.