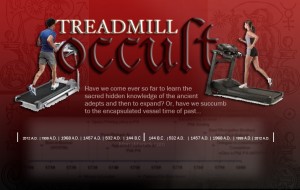 According to definition the word “Occult” comes from the Latin word “occults” meaning hidden and secret – collectively known as “knowledge of the hidden…meant for the knowledge of certain people” I’m not going to throw a dart and claim to know it all and say when knowledge began to be collected and classified as the occult (the fact is…I wasn’t there in the beginning) but I will most certainly say that I the occult stretches past the origins of religion. I will not sit and re-quote you passages from my stacks of useless books that I have no idea in hell how they got their facts past historians to be in print. But I will say a lot of folks back in the day knew their stuff – I’m sure it’s because they didn’t have such distractions of mobile phones and Facebook nor did they have the ill luxury of having to be exposed of pseudo occult garbage as we do in abundance these days.

It’s easy to do your homework and many will…but we’ve actually come a very long way from being ridiculed for using the natural ways of life such witchcraft etc. I remember a time when the movie Rosemary’s Baby (1968) and The Exorcist (1973) were both considered cutting edge and the sole reason why anything outside of conventional religion was considered taboo. In fact much to my surprise I found out that one of my favourite running soap opera’s growing up “Dark Shadows” (1966-1971 – one of the longest and only vampire movies on the tele at the time) is now being remade in 2012. It’s amazing to see that the studies around the occult is accepted more and more.

Today we’ve no problem watching such movies like “The Rite” with the leading actor Anthony Hopkins played an Exorcist thinking that it was no big deal of a movie. Case in study that in psychology inurement aka desensitization occurs when an emotional response is repeatedly evoked in situations in which the action tendency that is associated with the emotion proves irrelevant or unnecessary. With the phenomena of unveiled mysteries still yet to be revealed, I believe the population has become distracted by the special affects and desensitized what could be or is the truth – in awe with the frills around it – the blood, sex, and profanity. This may explain why nothing seems new under the moon and reinvented over and over again only with a punch here or there and in most cases either under a new title, or book cover.

It is not to say that our forefathers who recorded the mysteries had all the answers or that we can even document their findings as accurate. But I grow more and more puzzled to think that the authors of such books such as the Grimoirium Verum, Picatrix, Goetia, Black Pullet, The Sacred Magic of Abramelin the Mage and so on are the last stones of knowledge. I know many may argue about the few and I do boldly and honestly say few as only a few have “not” reinvented but have lead in my opinion alone; are the true visionary authors that will lend to the generations tomorrow. I know that there is an obvious trend and cycle to over play many paths… For instance, there was a time when wearing a pentagram was related to Satanism (I know…go figure, right!? LOL!) Now it’s an icon overlooked as just a symbol lost in time now, almost like a default. Let’s move over to Crystals and even Tarot cards… all no biggy and surprisingly found sold in a dollar store. (I know blasphemy isn’t it!!!)

Let’s move over to the LHP or darker arts: It’s appears that there’s a growing trend in who can evoke the most interesting demon these days. Which by the way most demons that I see people are talking about have Judaic phonetic spellings for some reason (as if they don’t come from all over). Not to mention that the many manuscripts and books I’ve read of recent resemble parts of fictional books. As hard as the truth may be said much the RHP and the LHP appear to be growing soft on me and becoming a bit fluffy (not occult at all) if you will do to the authenticity and the respect for the realism it all originates from.

With all the above as I look at my treadmill, I know that the sweat will drip from my brow and before I mount on the mechanical beast (the Treadmill…) that will do me good, I prepare myself to be dressed in form so the calories will burn up as I exercise in one place ending at the same point. The result? I can look at my body proudly to know that what I’ve done from point A to B has made a difference. I ask that although there has been some progression within the spiritual technologies of the occult in comparison to our founders of past, what do we have for those that will one day eagerly take the baton less we are in fact on a treadmill exercising the knowledge of past skipping alone the yellow brick road only reinventing…never discovering…never inventing.