Seeds Of The Hidden 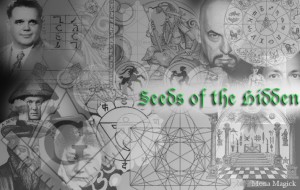 At some point there is a beginning…even at the time of nothing – yet the hidden or better yet with the “Occult” no one has ever quite found it’s beginning as its cord is attached to times birth. If we start at the definition many will argue that nothing is hidden…in fact everything is apparent and  staring most right in the eye. In earlier times thousands of years past today  those before saw with their  third eye….a star guiding them into the constellations, the reinterpretation of angelic dialects to the reveal of to demons of the Goetia..only to name a few esoteric paths practised.

So where are the beginnings of what so many swear their lives and sometimes souls upon? Is it that we hunger so much for intuitively thinking that there must be more than just the dogmatic religious approach? Why is it we feel that there must be a higher calling and power beyond our own to identify with?  Even more does the ego crave to swallow all around it becoming bigger than god? These questions and more will be addressed below in the brief chronological timeline of the occult history to understand where we’ve come from and where we’re going: But before you venture into the past to the present I ask you to ponder on where we go tomorrow as present categorically only reinvents the seekers of yesterday rather than carve a pavement towards a new path as so many of past.

If however we have found the truths, and unlocked the hidden then we can only concede to the to the cause of  the abundance of reinvention being  a glorious celebration of song. As we all know that this is not true, there is still much hidden…still much to be learned, discovered, and  consciousness raised more than ever before.

Of all the long list of those who have contributed to the DNA of the occult knowledge we’ve further researched, today’s aspiring adept occultist  on an average do more reinventing than discovery simply put.  Reinvention varies from authors publishing belief systems from a “different” perspective to claiming truth to something previously put in a different way.  I can accept that after looking at the chronological occult summary that I have provided that perhaps we may be going through a very slow transition…or even more it may be time for other areas of what makes an existence to merge and it’s not all about spirituality but a raised consciousness of combined knowledge into a whole.

Comprehensive Summary of the Occult Time Line
Where do you fit in? Where are the seeds of today and will there be any tomorrow?

c.580/570-c.500 B.C.E. Pythagoras : A Presocratic philosopher. Founder of a major school of philosophy/religion that emphasized the mystical interconnections in numbers, nature, and the human soul. The natural and the ethical world were inseparable.

c.515-c.450 B.C.E. Parmenides : On Nature, extant in fragments. Another of the Presocratics. Extends Pythagoras by insisting that all that exists is unchanging and unified. Therefore, if something is changing, it is illusory. This paves the way for the two-world view important for much mysticism. Influences: Pythagoras.

428-348 B.C.E. Plato : Sophist, Republic, Parmenides, many others. Most important of ancient philosophers. His philosophical system provides the basis of most later mystical forms. Influences: Pythagoras, Parmenides.

384-322 B.C.E Aristotle .: Metaphysics, De Anima, Nicomachean Ethics. While Aristotle himself is not really considered to be a mystic, he is an important influence on later mystics, especially when combined with Plato by Plotinus, and also when Christianized in the high Middle Ages.

c.20 B.C.E.-c.41 C.E. Philo : The Contemplative Life. An Alexandrian Jew who drew from Platonist tradition, Stoicism, and neo-Pythagoreanism to create a fusion of the active or virtuous life and the contemplative life.

6 AD – the Sefer Yetzirah was edited

c.232-304 C.E. Porphyry : Isagoge. Compiled Plotinus’ Enneads, and wrote a life of Plotinus. He was strongly anti-Christian, yet he became important in the history of Christian mysticism.

411-485 C.E. Proclus or Proclusthe Lycian : Neoplatonic philosopher was born. The Elements of Theology. Athenian Neo-platonist, who influenced Pseudo-Dionysius, and beyond him most of the mystical tradition. While respecting Plotinus, Proclus also amended his philosophical structure.

1314 AD – Jacques de Molay, last Grand Master of the Knights Templar, was burned at the stake in Paris

1486 AD – The Malleus Maleficarum, a major instrument of witch hunters was published

This site uses Akismet to reduce spam. Learn how your comment data is processed.