The Transformation & Perception of a “GOD” 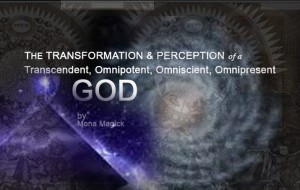 I believe… the “plan” was to read like this: “GOD” One God of the Universe maintaining universal meaning disregarding division of interpretation, of being Transcendent, Omnipotent, Omniscient, Omnipresent. To be beyond the bounds of human conception or understanding on all levels. Leaving basic understanding for most deciphering through symbolic representation. I will not bother to argue on the origins around the settings of Atenism of Akhenaten to Monotheism nor Polytheism of today regarding weather or not there is or should be one or many “God/gods, but only to truthfully admit that I cannot declare that I know the divine truth. However, if I am mistaken, and my wisdom is unbeknownst to myself then this is my theory:

I will take a bold stance against many spiritual concepts to pose that there is no “GOD” with personality of pardon, nor with the delegation of punishment to be given but a Force to draw upon for the greater or lessor…a founder by none. Such a Supreme Force would be subject to failures of misjudgment if this were not so. Religious zealots should remember to grasp that “GOD” is not attached to a religion as this would take on the position of subservient ranking to it’s maker and an appointed mascot. “All” religions have come from the thought-form of humanity rightfully so “she/he” is the “god” of her/his own – having nothing to do at all with the force of a so-called “GOD” but the individuals interpretation impressed upon others. Understandably, and mostly with good intentions, humanity has initiated the birth of religion through it’s prevailing circumstances of the times from which they lived.

However, with the changing shades of life many religions have kept the tenets of their faith unchanged. A GODLY Force has the complexities of multifaceted properties within its womb fertilizing the seeds for all to gather and grow from within their own hence allowing them god-like qualities. It is the duality in this Force that we call good and evil while others refer to this as balance with either being able to borrow against each other at any given time.

Being of Omnipotent Force does not lend more to light nor darkness, but only that of what is exercised and given to its offspring and host. It is senseless to challenge anyone on individual deity personas unless you’ve actually experienced a relationship with the deity and then if one is in the “knowing” there is no need to prove to another who cannot live off of another’s experience legitimately as it cannot be “real” to them. This is especially applicable to angelic and or daemonic forces that in essence is just a pure form from the source of all, “GOD”. One is most likely to argue that this may not come from the same Source but in all due honestly, there is a known fact that one may smell good one minute and take a “crap” in the lavatory and reek of unpleasant foul smells in a matter of seconds! The analogy rings true with the circumference of a full day consisting of sunrise and nightfall to life and death. Everything of the Omnipotent, Omniscient, Omnipresent Force is complete, perfect in it’s own, from any perspective facet.

Moving along, it is not to say that the countless gods, spirits daemons and angelic forces is not “real”, as they exist from both thought-form AND as descendant of the Force itself. When working with these demi-forces one needs to be mindful that it too has the power and relationship with the same Force to be inter-dependent calling upon power needed for its own. For this reason alone it is important not to allow ones ego to overtake logical reason that some things are beyond humanity. With that said, it may be wiser to “work” with all energies, that share the same Force rather than deceiving one’s own in thinking otherwise to control.

Bringing things down to earth, It reveals a new light to the saying that things “just aren’t just the same” anymore, but perhaps this is just another mystery come to pass of the forever more transformations. Connecting to the Force itself and having proof isn’t about visual or tangible manifestation nor the knowledge from written text of “forbidden secrets”, as so many in these times seek. Summing up all the calculations above, there hasn’t’ been such a huge single collective force where people by the billions people have been drawn to connect with their souls energy of love, hate, happiness, sadness belief and question without prejudice than the force of the internet. The question then focuses on what is “GOD” if not by name could it really be a force, a web of energy interconnecting? A collective embodiment of thought forms and cytoplasmic footprint connecting by fingertip pulses via a keyboard into a central circuit? I really don’t know but it seems close that it’s all about unification of energy on all levels. There is one other thing however that mans definition of “GOD” is beyond worship, spiritual dominance of being subservient and to date for the most part very inaccurate. I can say that no matter what your stance that transformation of what IS Transcendent, Omnipotent, Omniscient, Omnipresent is an inevitable to what most consciously believe today.