A Force to Close…. Curio & bookstores in the shadows 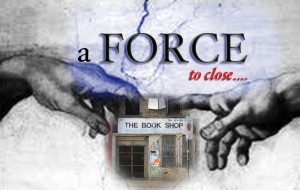 It is the end of an era in the sense of what it stands for when it comes to the adventure of self-discovery within your community of the nearest occult store.  For many seekers of occult knowledge, and of course the curious your local occult store was place to go for books and magazines on Metaphysics, Eastern philosophy, unlimited areas of occult and alternative health practices.

In the beginning there were the “old school” shops where you could get everything you needed for any ritual from candles, oil, herbs, alter cloths, alter tools, robes,  and handmade wands (not the manufactured one’s you see on the display stands that resemble Christmas tree hanging ornaments!)  As People became more curious the “old school” shops were bit heavy, a bit intimidating for your average person to walk in on the street with ought feeling a bit out of place so with any business demand it didn’t keep up with the rise of inflation, the old school occult stores closed they were replaced with…lets just say… stores that catered to the market that was willing to spend money.

As the market expanded you saw more and more shops popping up replaced by soft-core occult popularly known as “New Age” When more New Age shops started appearing out of nowhere it was really confusing for some serious occult students to get their bearings because it was hard to differentiate the seriousness to the point of many stores appearing as sheer novelty stores. “Obviously, the serious oriented occult bookstores and shops weren’t for everyone… so as the New Age shops specialized more and more in the cheap gemstones, books by Deepak Chopra and self-righteous moralizing Barnes and Noble caught onto the market – closed down the bookshops by the convenience of offering everything else and more the smaller shops didn’t as far as book sections go, and the old occult shops fell by the wayside, became hard to find from what any serious student needed for a simple ritual so many turned to botanicas that catered to Voodoo and Santeria to buy oils other essential items.

With sales down, most stores could no longer pay its rent and overhead costs as a result they carried fewer quality selections to browse and more and more then sought out to online options such as Amazon which then became “King” because of it’s inherited customers from the brick and mortar stores that it ran out of business. Amazon cannot completely hold blame…when the web and on-line discount book outlets gained acceptance, the new age shops really lost their primary line of sales. The new age shops went to selling primarily consumables… everything from nutritional supplements, candles, pendulums, bric-a-brac, crystals, ritual stuff and the like. And the owners typically had to go to work at a “day job” to support themselves while leaving and inexperienced clerk behind to manage the shop. The advice spewing from these clerks behind the register wasn’t on the level, and the consumables didn’t work, so the service wasn’t there any more. In summary, you just can’t expect a newbie to take the place of a seasoned and passionate professional!